The Tudors Wiki
Register
Don't have an account?
Sign In
Advertisement
in: Characters, House Tudor, House Seymour,
and 11 more

"Death of a Queen"

"Death of a Monarchy"

King of England and Ireland

House of Tudor, Seymour Family, himself

Prince Edward Tudor is the son of King Henry VIII and Jane Seymour, and the youngest of Henry's three legitimate children. He would eventually succeed his father as King, but was not of age and therefore had his uncle Earl Edward Seymour serving as Lord Protector. He appears in Season Three as an infant and in Season Four as a young boy.

Edward is first shown in episode 3.04 when he is born, to the delight of his father, but his mother Jane dies twelve days later, plunging the King into grief. Henry, after emerging from his grieving, brings his infant son to the balcony to show the cheering crowds; however, he obsessively protects his son's exposure for the next four episodes, paranoid both due to his own pathological fear of disease and his wife's death from puerperal fever. His elder uncle Edward Seymour is equally protective, since Prince Edward is the Seymour family's only living connection to the Royal line.

In Season Four, Edward is shown as a young boy, played by Eoin Murtagh (later Jack Hathaway in the final episode), and is under the watchful care of Lady Margaret Bryan, the former governess of his sister Elizabeth. He has a happy relationship with both his older half-sisters, Princess Mary and Princess Elizabeth; Elizabeth sometimes attempts to tutor him, but he has a mischevious streak (like her) and gets distracted easily. Henry dotes on his most favored child and gently roughouses with him sometimes, but continues to obsessively monitor his health. Edward carriess a locket with a portrait of his mother in his pocket, as well as one of her thimbles (given to him by his father) and Henry remarks at one point how much Edward looks like Jane. In episode 4.04 Elizabeth notices Edward is dangerously ill and calls for a his governess, who gets a doctor; when Henry, who is making a pilgrimage in York, hears the news, he races across the country to be at his son's side. The doctors fear Edward won't make it, but when Henry wakes up in the morning he finds Edward tugging his hair; his fever is broken, and Henry gives thanks to God.

Edward has a friendly relationship with Henry's sixth wife, Catherine Parr, who proves a kindly and helpful stepmother. She encourages him to take his tutoring more seriously, but remarks that there will be more fun activities for him as well; however, Catherine privately describes Edward as a 'poor child' since Henry so often shuts him away from the world, unlike his sisters. The boy doesn't quite seem to know what to make of his father Henry, wistfully remarking to Catherine that he supposes Henry must love him, since he gives him so many gifts; Catherine gently tells him he is the most beloved of all his father's children. In episode 4.08, Edward is happy to hear Catherine tell of his father's military victory at the Siege of Boulogne.

Edward is regarded more as a political weapon by Henry's courtiers than an actual heir at first. His Protestant uncles Edward and Thomas Seymour, who wield increasing power, are determined to see their bloodline claim the throne through Edward, while the fanatic Catholic Bishop Gardiner sees Princess Mary as a more rightful heir (because she's the eldest of Henry's children, because she's a devout Catholic and because Jane Seymour was never actually crowned Queen of England). Meanwhile, the Earl of Surrey makes no secret of his family's old claim to the throne, and a supposed plot by him to take Edward hostage and make himself King is discovered, leading to a show trial where Surrey is sentenced to death for treason in 4.09.

In the series finale, Henry- nearing the end of his life- decides to sepparate from his family, and bids his wife and children- especially Edward- a loving farewell. He instructs that, should Edward have no children, Mary- and then, Elizabeth- will succeed him, and asks his daughters to look after their little brother, which they agree to. To help govern the kingdom until Edward is of age, Henry sets up Edward Seymour as Lord Protector, along with Archbishop of Canterbury Thomas Cranmer.

Henry also has a vision of Edward and his mother Jane Seymour in the finale. After Henry lovingly greets Jane, she angrily rebukes him for shutting Edward away from the world as Henry's father did with him, calling him her 'poor child' and saying he is not ready. Henry desperately tries to assure her Edward is the most well-cared for and the most beloved of his children, but Jane sadly says he will die young and that Henry's actions have effectively killed him. Horrified and in tears, Henry tries to deny it as Jane and Edward disappear.

On his father's death in early 1547, Edward became King Edward VI. As his father had decreed, Edward's power was delegated largely to a 15 year old teenager. Privy Council until he turned 18; the new council was dominated by the Protestant faction at court, as Henry had removed/imprisoned two of the leading conservative Catholics- Stephen Gardiner and the Duke of Norfolk- prior to his death. Despite his youth, Edward was still quite involved in carrying out the English Reformation, although day-to-day governance was usually delegated to the Regency Council- who, in turn, were dominated by Edward Seymour Duke of Sommerset, the king's uncle and Lord Protector.

In Edward's youth, his father Henry had managed to cow Scotland into submission after the Battle of Sollway Moss, and one of the conditions of the peace treaty was Edward's betrothal to the 7-year-old Mary Queen of Scots, possibly paving the way for a union of England and Scotland; however, the Scots tore up the treaty and renewed their previous alliance with France by the end of the year, throwing England back into war with Scotland. This war continued into Edward's reign, under the direction of Sommerset. Although initially Sommerset won victory after victory in Scotland, savagely pillaging the countryside, the war bled England's treasury dry; Mary Queen of Scots was moved to France and betrothed to the Dauphin, drawing France into the war and putting England on a war of two fronts. French attacks on Boulogne- a fortified port seized by Henry VIII- forced the English to withdraw from Scotland, and in 1550 and 1551 they signed separate peace treaties with their two opponents.

Edward's short reign was largely characterized by the expansion of the Protestant Reformation in England, under the guidance of Cranmer and his uncle Edward; it was under Edward that the country truly developed an Anglican branch of Protestantism. The confiscation of church property and the destruction of images were not unopposed- the conservative clergy fought it with everything they had- but Edward's Council enforced their reformation as ruthlessly as Henry VIII had, with the young King's approval. Powerful Catholics were removed from court offices and imprisoned or executed if they openly opposed the Edwardian Reformation. Although Protestants were not yet the majority of the population by the end of Edward's reign, their numbers grew significantly, in part due to religious texts being much more easily available for the under-educated (under the Protestant regime, texts were provided in English rather than Latin).

Edward's council was characterized by several power struggles and economic mismanagement. His younger uncle, Thomas Seymour, recklessly attempted to use his influence over the King to expand his own power, resentful of his older brother. This led to Thomas being in a compromising and threatening position in the King's appartments, causing his execution for treason. Edward Seymour himself was removed from power by the Privy Council in 1550, who were becoming impatient with his costly Scottish war and mismanagement; since he had not been made Lord Protector in Henry VIII's will but by the will of the Council, they claimed they had the authority to remove him if necessary. Athough Seymour was briefly restored to the Privy Council, he was later arrested and executed in 1552 for plotting against his successor, John Dudley, Duke of Northumberland. King Edward himself had grown increasingly mistrustful of both his Seymour uncles during his reign as both were much more concerned with their own power base than keeping order and economic administration. Dudley signed a treaty with France that returned Boulogne to France and betrothed Edward to Elisabeth of Valois, but this was not followed through due to Edward's untimely death.

King Edward unexpectedly became very ill in 1553; after about five months of relapses, his condition was declared terminal. In his will, in an attempt to prevent the restoration of Catholicism to England, he and Dudley dropped both his sisters from the line of Succession, instead naming his distant cousin Lady Jane Grey as his heir, with her husband Guildford. Guildford was actually John Dudley’s son, which explains why Dudley tried to encourage Edward to do this, as if his daughter in-law was Queen, her husband could be King consort or even her Co-ruler. However, popular opinion swept this gesture aside; nine days after Edward's death (June 6, 1553) Jane and Guildford were deposed and later executed, with Mary Tudor taking the throne. Edward's Protestant reforms were nonetheless revived after the Catholic Mary's death by his equally Protestant sister, Elizabeth Tudor, who succeeded Mary.

Edward historically did not resemble his father, except having a muscular appearance line his last years of life. Henry lovingly remarks to his son in Season Four "I can see your mother in you." In the series and historically, Edward had blond hair. Contrary to myths, with the exception of one bout of extreme fever (as shown in 4.04) Edward was a very healthy boy until his unexpected death at age 15 of an illness. 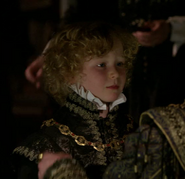 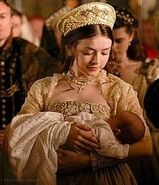 Princess Mary holds her baby brother Edward at his baptism
Community content is available under CC-BY-SA unless otherwise noted.
Advertisement