Natalie Dormer is an English actress who portrays Anne Boleyn in The Tudors from seasons 1-2.  She also appears briefly in a dream sequence in series finale, her last appearance in the series.

Dormer is well-known for her highly-praised role as Anne in The Tudors,  for which she won two Gemini awards for Best Actress.  From 2012-2016 she co-starred on the HBO medieval fantasy series Game of Thrones as Margaery Tyrell. Ironically, she portrays the cunning fiance of a ruthless king in Game of Thrones, similar to her role in The Tudors.  She also has a recurring role as the Season 1 antagonist Irene Adler/Moriarty in the CBS crime drama Elementary (an American-based adaptation of Sherlock Holmes), and had a role in the brief hit BBC series The Fades.  In film, she has had minor roles in films such as Captain America: The First Avenger, Casanova and Rush.  In 2014-15 she had a prominent role in both film installments of The Hunger Games: Mockingjay as Cressida, a role for which she shaved part of her head.  Dormer has also been highly praised for her stage acting, having starred on the London stage in plays such as After Miss Julie and Sweet Nothings. In 2020, she starred in the highly praised 1930's miniseries Penny Dreadful: City of Angels, as three different incarnations of the same character.

Dormer was previously engaged to Irish director Anthony Byrne since 2011; the two met while she was in Dublin filming The Tudors. After splitting up, they co-wrote the film In Darkness (which Dormer starred in), a process both described as "challenging". Dormer has been in a relationship with English actor David Oakes since 2018; in 2021, she gave birth to their daughter.

She is originally from Berkshire, England. Incidentally, one of her ancestors, Lady Jane Dormer, was a lady-in-waiting to Queen Mary I, the stepdaughter of her character on The Tudors.

Natalie Dormer with her head partly shaved for The Hunger Games 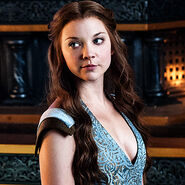 Natalie as Margaery Tyrell in Game of Thrones